Stablecoins are digital currencies whose value is tied to that of another asset – most often the US dollar – designed to reduce the inherent volatility of cryptocurrencies. Stablecoins are mainly used to facilitate efficient and simple cryptocurrency trading, although they are increasingly used for payments within decentralized applications (dApps), remittances and settlement, among other use cases.

While the definitions of each type of stablecoin are still blurry, each type has advantages and disadvantages. Currently, fiat guarantee stablecoins have the strongest track record of price stability and have taken the lead in terms of business and institutional usage.

How do algorithmic stablecoins work?

Algorithmic stablecoins are digital currencies designed to achieve price stability. They use algorithms to incentivize the behavior of market participants and to manipulate the circulating supply so that any given price of the coins should – in theory – stabilize around the peg.

Algorithmic stablecoins are the epitome of true decentralization, with no regulatory bodies to maintain or oversee proceedings. The code is what is responsible for both supply and demand, along with the target price. In theory, algorithmic stablecoins are able to achieve price stability in the absence of tangible guarantees, eliminating the possibility of errors for the end of the user. These fundamental principles offer a scalable solution that is not offered by any other set on the market at the moment.

Algorithmic rebasing stablecoins manipulate the basic feed to maintain the peg. In fact, the protocol burns (removes) the supply and mints (adds) the supply from circulation in proportion to the deviation of the coin from the $1 peg.

The expansion and contraction of the supply of circulating tokens is referred to as a rebase mechanism.

Ampleforth (AMPL) is an example of an algorithmic rebase stablecoin, with a rebase programmed every 24 hours and a target price of $1. If the price of AMPL falls below $1, the current supply contracts during repaving, increasing the value of each token. Conversely, if the price of AMPL exceeds $1, the circulating supply expands during the rebase, reducing the value of each AMPL token.

From a user’s point of view, the amount of tokens in each wallet will decrease or increase accordingly. However, the total value of each portfolio does not change, thanks to the rebasing mechanism. Other rebase tokens include RMPL, YAM, and BASED.

Seigniorage Stablecoins claim to use one or two additional tokens to absorb the volatility of the stablecoin. Through this process, one coin is minted or burned to control the valley of another.

Take a three-token system consisting of a stablecoin, a share, and a bond token. When the stablecoin is above the peg target, the protocol will mint more stable coins and distribute them to equity token holders, who can then sell them, increasing supply and decreasing the price.

In theory, seigniorage-based stablecoins can work; however, in reality, these types of stablecoins suffer from bank runs as bond incentives are generally not strong enough to entice users to intervene during a price spiral, especially without a collateral backstop.

Terra Lab’s Luna and UST cryptocurrencies were an example of seigniorage stablecoins. Unlike fiat-backed stablecoins like USDC and BUSD, FSO is not backed by real assets. Instead, the value of UST is backed by a twin token called LUNA and relies on algorithms to keep its $1 peg.

When THE price of FSO rises too high, its algorithms mint more LUNA to lower its price – or the opposite if the price drops too low. LUNA is meant to serve as a kind of shock absorber for the price of FSO. For this price stabilization mechanism to work, users can redeem 1 FSO for $1 of LUNA, even if UST is worth less than $1.

However, despite the dynamic nature of the protocol, the Earth ecosystem has recently collapsed. Before the collapse, over $2 billion of FSO was not paid (taken away from the Anchor protocol), and hundreds of millions of this was immediately sold, eventually pushing the price of FSO to 91 cents.

In theory, UST LUNA’s sister token should have been able to offset the decrease in demand for FSO; however, bearish sentiment in the broader cryptocurrency market has led to the collapse in the price of LUNA, as of many other altcoins, in recent weeks.

This situation caused a huge problem because it meant that the amount of LUNA that had to be sold in exchange for FSO increased dramatically. With UST depegged and an increasing amount of LUNA dumped on the open market, fear that there would not be enough funds in the Terra project to properly support the value of magnified FSO. This further increased the selling pressure on LUNA and led to the collapse of FSO: the value of the LUNA token fell by 99.99% and the value of UST plummeted to around $0.03. For further explanations on the FSO situation click here.

Fractional stablecoins refer to stablecoins that are partially collateral-backed and partially algorithmically stabilized. These stablecoins have a collateralization ratio of less than or equal to 100%, which means that the stablecoin can be backed by fewer real dollars or cryptocurrency – a fraction of them – than its supposed total value.

Purely algorithmic stable coins such as rebase stablecoins often experience extreme periods of volatility that contradict the sole purpose of being a stablecoin. A fractional stablecoin attempts to solve this problem by reducing the pressure on algorithms to support the peg.

Frax is a stablecoin protocol supported by both mathematical algorithms and asset guarantees. The project aims to make its token work as reliable, scalable and stable on-chain money. The Frax cryptographic protocol uses two different asset classes: the Frax stablecoin (FRAX) (designed to maintain an anchor at $1 USD) and the Frax Shares (FXS) utility and governance token (which is used to support the various functions of the platform).

The frax minting and redemption mechanism is critical to keeping the PEG stable of the FRAX token to the USDC. Essentially, FRAX can be coined by any user who provides not only collateral tokens (currently USDC) but also governance tokens (FXS). The percentage proportion of each token is given by the Frax collateral ratio that changes according to supply and demand. For example, a 50% collateral ratio means that one dollar of FRAX can be minted by providing $0.50 USDC and $0.50 of FXS. This mechanism works in reverse when a user chooses to redeem their Frax for the USDC and FXS initially provided.

When new FRAX stablecoins are minted, FXS is burned proportionally to the unguaranteed amount. Using the collateralization ratio of the previous example of 50%, for every FRAX token minted, $0.50 of FXS is burned. This means that by minting more FRAX, the circulating amount of FXS is reduced.

However, as usage and adoption increase, more FRAX tokens are supposed to be minted than redeemed, resulting in substantial increases in FXS burned. As the circulating supply of FRAX increases sufficiently, the discrepancy between supply and demand for FXS is bound to act as a shock absorber for FRAX’s price stability.

Why are algorithmic stablecoins risky?

The idea of algorithmic stablecoins certainly seems to have a merit in terms of ensuring decentralization without regulatory bodies. The lack of requirements for tangible assets mitigates the possibility of human error, and also improves the efficiency and scalability of capital.

Despite this, many complex factors can too easily affect the value of an algorithmic stablecoin and cause significant financial losses. However, as new examples of algorithm-backed stablecoins emerge, it’s important to do your research and understand what you’re investing your money in. 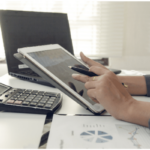